Branding Lessons from the Met Gala

Branding Lessons from the Met Gala

The social media world was abuzz last night with hundreds of thousands of posts about the red carpet arrivals at the 2015 Met Gala in New York. It seemed as if only seconds passed between a female celebrity’s first step out of their car and a picture of her dress on Instagram, Twitter, or Facebook.

Social media gives everyone a platform to put share their opinion and get involved in the discussion. The traditional fodder surrounds “Who are you wearing?” type conversations. However, there are some valuable branding lessons to be learned from the red carpet:

Even women with the most amazing bodies in the world could not have pulled off Beyonce’s “naked dress” the way she did. She not only knows her body, but also her brand. She has created an image for herself, even going so far as to creating an on-stage alter ego, Sasha Fierce, to represent her brand. Her trademarks? Form-fitting, fashion-forward, and above all: making a statement. Fierce pushes the envelope, which is precisely what the buzzed about Givenchy gown did last night. 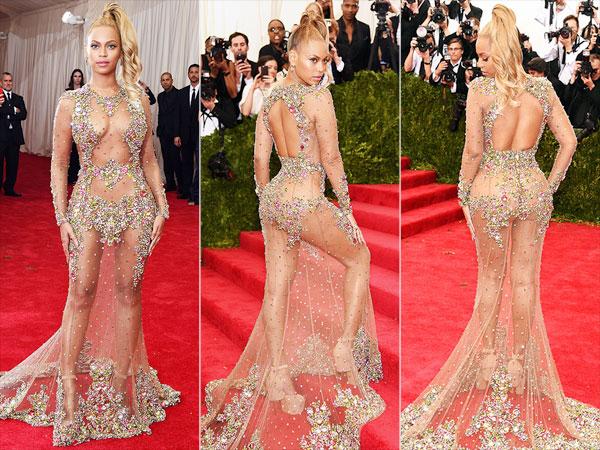 Kim Kardashian, also clad in a barely-there dress, had walked the red carpet just before Beyonce, yet did not receive the same overwhelming response. Kardashian tried too hard. Her strengths lie in her recognizable hourglass figure, prominent brows and sultry makeup. Being on the cutting edge of fashion is not one of them so inevitably her dress fell flat in comparison to Beyonce.

2. You don’t have to be controversial to make a statement.

Yes, this may seem to counteract the evidence presented above as Beyonce’s dress was both statement-making and highly controversial, at least for those outside any of the fashion capitals of the world, given its abundant amounts of sheerness. However, a slew of other leading ladies got thousands of amounts of tweets, Instagram shares, and Facebook chatter about their elegant, yet understated-by comparison-gowns. Kerry Washington, Reese Witherspoon, and Kate Beckinsale, for example, each of stayed true to her brand. These women are known for their fresh-faced, clean, and approachable yet sexy fashion sense.

Even Ann Hathaway, while not in the most favored dress by bloggers or traditional media outlets, remained covered from nearly head-to-toe and still managed to start a discussion. She wasn’t overly make up, nearly naked, or sporting the avant garde headpiece of Sarah Jessica Parker, yet she sparked a conversation. Her unique choice, from the usually traditional designer Ralph Lauren, even warranted her own headline in a mass of compilation stories and slide shows throughout the Internet today. 3. Stay engaged with your audience.

This is one thing Kim Kardashian did better than anyone else. Throughout the night she tweeted and Instagramed photos from inside the party. This event is a rare opportunity for a very select group of people to attend so remaining active on social media humanizes the experience to make everyone feel like they too can be there. Kardashian became more relatable to her fans, and avoided coming across as a bragger, by showcasing her own fan experience with Jennifer Lopez. The takeaway here is to make your brand human. When potential customers are able to relate to your company (i.e. the people behind it) they are more likely to buy what you are selling. Develop Brand Loyalty By Speaking Out First Steps of Executing A Rebrand